Get fresh music recommendations delivered to your inbox every Friday.

PLEX: In Honor of Drew Perry

by Friends of Drew Perry 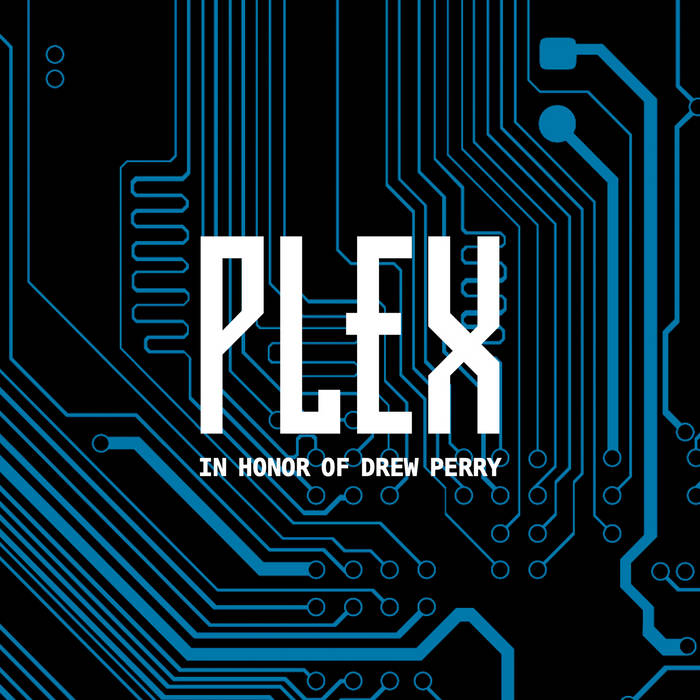 This compilation is a tribute to our friend Drew Perry and is coordinated with PLEXFEST (see facebook.com/events/1139368496132345/). All money raised will go to help Drew's closest family members. Voidstar Productions will not keep any money from this benefit compilation.

About PLEXFEST : In tribute to Drew Perry, his friends and family present a concert performed by Electronic and Industrial artists who he enjoyed, most of whom he knew personally. Everyone involved in this event is donating their skills, time, and resources with nothing in return.

Friends of Drew Perry who contributed to this compilation include (listed alphabetically):

Organized with Rob Perry and the Perry family.
Produced by David 'Deftly-D' Dodson for Voidstar Productions.
Co-produced and mastered by Rob Galbraith of Component Recordings.
Cover art design by Derek Rush.
All music by the artists.

Track 11: Nau-Zee-auN
For this recording, Nau-Zee-auN was David 'Deftly-D' Dodson.
Written and recorded in honor of Drew Perry though February 2017, with inspiration from conversations and shared experiences with Drew at shows and festivals.
Nau-Zee-auN is currently Deftly-D, Andrew Grant, Rob Galbraith, Elizabeth Virosa and Darryl Hell.

Track 13 - this time the [law-rah] collective is bauke van der wal
recorded at studio am rhein, utrecht
in loving memory of drew perry

"Drew’s family shares their appreciation for the love and service shown by the collaborators during this unimaginable time. We know how much he loved his music. We are humbled and comforted to see how much his music loved him back. Thoughts and Blessings to all who have enjoyed his company as well as this tangible effort of what Drew Perry meant to many. He’s pissed it’s not a part of his collection."
- Rob Perry (Drew's brother)

"I have been friends with Drew on social media channels for some time and finally met him in person in Boston last year at the Voidstar 25th Anniversary festival that I performed at. From the moment that I met Drew, I realized that he was very different from most people. He was genuine. I instantly knew him to be a good soul. There are so few people that you meet or come across, day in, day out that they tend to glow.

I'm very bad at keeping in touch with people, but Drew would check in with me for no other reason just to say a friendly "Hey!" and to make sure that I was okay.

I sincerely want to extend my best to Drew's family and friends. Drew was someone who meant something to a lot of people, myself included. I'm better for having known him."
- Lenny (Cenotype)

"I knew Drew because not only do we live in the same boring Midwestern state, but he was also one of my biggest fans and was always telling me so. We primarily knew each other online, but I did meet him twice at two different shows in Chicago. One of those shows I had expressed frustration about my unlikely attendance due to not being able afford it, and out of the goodness of his heart he bought me a ticket, totally unprompted without me even asking. He said he just wanted to see me there, and the only repayment he insisted on was that I get to work on some new music. At that show he also connected me with David Dodson of Voidstar Productions, who I had known online for well over a decade, and this meeting resulted in a plan for an upcoming Freeze Etch release. Consider my track on this compilation and the new Freeze Etch album as my repayment of that debt. My thoughts are with his family and friends."
- Adam (Freeze Etch)

"Drew, you are an example for others to live by. A large compassionate generous heart who showed in words and actions your care for friends, family, eclectic music and sports (remembering our long discussion on sports perspectives when I first met you though Eric and Bauke). Very much wishing you were here."
- Deftly / David (Nau-Zee-auN)

"Drew once offered a fun deal to me and Edgey at the Voidstar Productions 25 Year Anniversary Festival. He offered to buy one of each album we had for sale if we would write another Christmas track that year, because his son enjoyed our last one so much.

Later that year after we released our new Christmas song as agreed, Drew wrote me a nice message telling me how much it meant to them. "More than you know" he said."
- Ulla (Angina P)

"I have met Drew in Cincinnati during my north american tour in 2004. He was the only audience showing up at the venue - driving all the way up from Indianapolis just to see us play. I was truly impressed by this kind of enthusiasm. We clicked immediately and we ended up having a long and nerdy conversation about music and culture in general. I was blown away by his knowledge about German Hip Hop and Rock Music - he even knew the lyrics of some German tunes better than I did! We've met again on Facebook several years later and quickly became close friends. I still cannot grasp the fact that he is no longer with us. I will always remember him for what he was - a warm and gentle giant with a heart of gold."
- Roland (Needle Sharing)

"This track was written specifically for Drew, who despite knowing each other fairly briefly, left a lasting impression on me as a person who unapologetically embraced what he loved, was fully generous of spirit, and full of life. Here's to you, Drew."
- Dana (Insect Ark)

"From all of our adventures stretching from Boston to Chicago, Los Angeles to New Orleans, Drew's passion for life and his love of music was worn on his sleeve for all to see. His generosity and support was exhibited every day to all he met. He was truly one of a kind and will be missed. Godspeed brother and keep rockin'! \m/"
- Carl (N.L.I.C.)

As of 2017, Voidstar Productions is focusing more on new releases.

Voidstar Productions was founded in 1991.

Our music may be described as:

Bandcamp Daily  your guide to the world of Bandcamp